An Autistic Kid's Thoughts on Inclusion.....

For many years, we tried to make school work for our Autistic child.  He had some successes, and a lot of good teachers, along with some really horrifying experiences and some staff who just did not get it.   When we decided to homeschool, my son was excited, but I was pretty terrified.  I have made some mistakes, but overall it is turning out to be such a positive experience for the both of us.  Admittedly, this is not a choice that everyone can or should make, so I am only speaking of our own experience with homeschooling.

One of the stories that we read this week in homeschool was about a little girl with a physical disability who was new to a classroom.   The story was overall a positive one, with characters asking questions about disability and eventually, the child was accepted and mainstreamed into the class with few difficulties.   Unfortunately, this is not a reality for many children with developmental or intellectual disabilities.  And my son knew it firsthand.

This was an opportunity for us to talk about my son’s own experiences with school.  He has been included, mainstreamed and put in a segregated classroom….due in part to how much we have moved in the past few years and dealing with various school districts with wildly different views on inclusion and the value of Disabled students.

He wanted to share his thoughts on this topic, so he wrote about it: 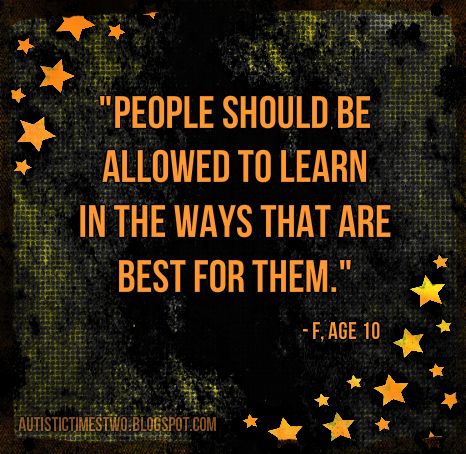 Image:  Orange text reads “People shold be allowed to learn in the ways that are best for them.” -F, age 10.  Text is on dark textured background with orange/yellow stars scattered in the lower right and upper left corners.

My son’s thoughts on the difference between mainstreaming, segregation and inclusion:


Inclusion is good because it lets you take breaks when you need to and you are supported in a helpful way.  Mainstreaming is neither bad nor good because you may or may not be supported very well.

It was terrible to be mainstreamed.  I didn’t get any breaks except for lunch.  People did not really understand me.  I am not so sure they tried to understand me.   I was not supported.   It made me disappointed, depressed and sad sometimes.   It was because I was not helped.

When I was in a segregated class that was very terrible.  Nobody understood me very well.  I wanted to be included, but that never happened.   It made me feel the same as when I was mainstreamed.

I think inclusion could be a good thing.

I think it would look like a room where people share their creative thoughts and have a really nice teacher.   It also there would be a lot of artwork with everyone being so creative.  People should be allowed to learn in the ways that are best for them.


For kids with disabilities, people should try to support them.  I think it would feel pretty good for kids to be thought of as a valuable person.
Posted by Lei at 12:24 PM