The Media Has It Wrong About Autism And PTSD


There were many problematic aspects to this story.


Obviously.  First of all, I don’t buy the whole “Warrior Mom” thing.   It’s gross.  It’s ableist and it’s incredibly disrespectful to your children.  The entire story didn’t even attempt to understand the point of view of the Autistic person.  These types of stories rarely do.  Her Autistic child is non speaking, and we are told that he is unable to communicate.   I’m sorry, but everyone can communicate.  Unless you are dead or unconscious, you are able to communicate.  It might not be spoken language, but that doesn’t mean there is no communication.  It just means that the people around you aren’t working hard enough to make sure that you are being supported and understood.  Is that the fault of the Autistic person or the fault of the people who will only accept traditional, spoken forms of communication?


It would be hard to pick apart EVERY offensive and ableist thing about this story, because there is just SO MUCH WRONG WITH IT.


Is parenting an Autistic kid hard?


But so is parenting ANY kid.  Parenting is stressful. It is hard.  If parenting were without challenges and hardships, CHILDREN WOULD NOT NEED PARENTS TO RAISE AND GUIDE THEM. Supporting your kids is the right thing to do, even when it is difficult or stressful.

BECAUSE THAT IS WHAT A GOOD PARENT DOES.

It is literally the bare minimum that our kids deserve.  Parenting is not something that is easy, but that is not our children’s fault.   I have said it before, but parenting is a humbling experience.   We parents do not know everything, but it’s our job to do the best that we can without tearing our children apart because it’s harder than we thought it would be.   If we talk about our children as a burden and a crisis, we are not building them up or loving them unconditionally.  We are tearing them down and telling them that we are not in their corner, we are not on their side.


It is the ultimate betrayal.

I do want to talk about one thing in this story that is often ignored.  PTSD and autism are a real problem, but not because of what we do to our parents, but because of every Autistic adult I know, including myself, I don’t know one that does not have PTSD due to being treated like a burden or a problem that needed to be fixed for their whole lives.   That’s the story the media needs to tell.  The effects of “treatments” and therapies, the effects of being talked to your whole life like you are causing everyone around you to suffer.  The effects of never being good enough, even when you are doing your best.  Your best isn’t “normal”.  Your best is just being who you are, being Autistic, and it’s not enough.


When you treat your kids like they are a problem just for existing while Autistic, you are teaching them ableism.  They are internalizing it.  They are absorbing all of those messages about autism that you are telling the world.  Even if you don’t think they are, they are listening.   They are watching, they are hearing.   What kind of messages do you want them to learn about themselves?What you tell the world about them is how the world will treat them.   If their own parents are telling people they are a burden and a crisis, why would complete strangers give a damn about them or their rights? 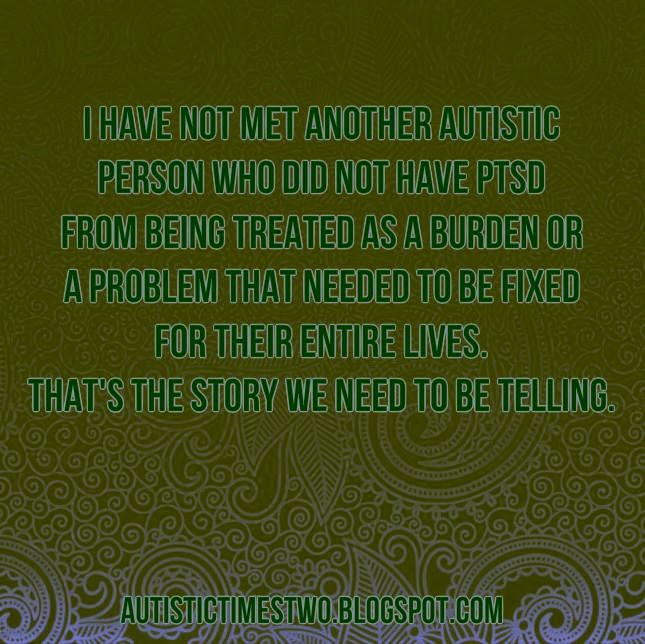 Image: Green text reads : "I have not met another Autistic person who did not have PTSD from being treated as a burden or a problem that needed to be fixed for their entire lifes. That's the story we need to be telling. autistictimestwo.blogspot.com Text is on olive green/light purple paisley background.
Posted by Lei at 6:40 PM