What It's REALLY Like When Your Kid Gets An Autism Diagnosis

Another day, another disgusting article from a non-autistic parent of an autistic child telling the world “what it’s really like” when your child receives an autism diagnosis.  I feel like I see these types of articles so often, yet each one is framed as if it were the first time a parent was ever given a platform to complain about autism  in the history of ignoring and speaking over autistic voices ever.

Well, I’m a parent too and these types of articles that talk about “grief” and “devastation” and usually refer to non-autistic people as “experts” are not only ableist and offensive, they are abusive.  It is abusive to talk about your child to the entire world as if they are a problem to be solved.  It is a betrayal to your child.  It is a betrayal to the promise we make as parents to protect and unconditionally love our children.

It’s also a lie.  And parents need to stop telling it to themselves, the world and most importantly, their own children.   How you talk about autism is how you are telling the world to treat your autistic kid.  Don’t ever forget that.

Do you want to know what it’s REALLY like to get an autism diagnosis for your child?  I can tell you what it was like for me as a parent to an autistic child since apparently my kid’s diagnosis is all about me.  Because the entire process is horrifying and scary, but not for the reasons you think it is.

It was an answer to a question I already knew the answer to.

It was watching him have to go through rounds of dehumanizing and invasive questions being asked about him right in front of him like he wasn’t even there and wondering why the hell they kept offering ME tissues and telling ME it was okay to cry.

It was doctors and therapists trying to convince me that ABA 20 plus hours a week was the only hope for my child to have a “normal” life.  Even when I knew in my heart that was wrong, they tried to convince me repeatedly that I needed to start working day and night to fix this beautiful, not-even-broken child that I am so incredibly lucky to call my kid.  It was being told that I was failing him as a parent because I cared more about his self esteem and happiness than trying to mold him into something he was never meant to be.

It was navigating confusing and inaccessible services that I was told were necessary because of some bullshit “developmental window”.  It was being told that I was to ignore my non speaking child when he didn’t “use his words”, no matter how distressed he became.  A loving connection with my child was seen as a failure on my part.  I was “too easy” on him.  I made him “spoiled” and allowed him to “manipulate” me.  Even though I knew that when the world was too much, I needed to be his soft place to land.  We are told that when our children are autistic, we must be “tough” and to ignore their needs.  That is something I could never, would never do.

It was being pressured to make every moment “a teachable moment” instead of allowing him to enjoy his childhood or ever have a second of down time.

It was being bombarded with inaccurate information from hate groups like Autism Speaks instead of being directed to learn about autism from actually autistic people.  It was being taught that autism was the enemy and that I had to be a “warrior”.   It was being told that I needed to fight autism because somewhere, there was another kid inside mine, a version of himself that was not even him and I was supposed to want that instead of the perfect kid right in front of me.

It was people giving me the sad face like my child’s neurology was something to be mourned.  It was seeing how pervasive and ugly ableism is in a completely new way.  It was the whole world telling me that I was a victim of my child’s disability….but refusing to see how their ideas and attitudes victimize disabled people every day.

Getting an autism diagnosis for your child is not the end of the world, it’s just official confirmation in writing of something you already knew.  It changes nothing about who your child is and how they deserve to be loved.  Don’t ever let anyone make you think that it should. 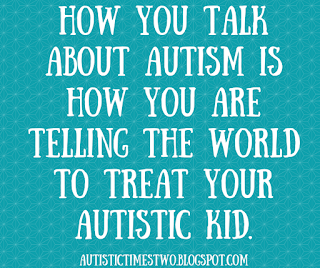 image: blue/white starburst background with white text that reads: "How you talk about autism is how you are telling the world to treat your autistic kid." autistictimestwo.blogspot.com