My Kid is NOT a Brat, But Maybe You're Kind of An Asshole

Recently, a parenting article has been going around the interwebs and popping up on my Facebook feed.   The article talks about all the ways that some parents coddle and make their children into “brats”  by horrible, abusive things such as “wanting them to be happy” and “asking them what they want for dinner.”

So, first I want to address the inherent ableism in this article.  Because it is incredibly ableist to assume that all children have the same physical, developmental and cognitive abilities and executive functioning skills that this list seems to assume that they do.  Secondly, parenting is not us versus them.  People who have that mentality are going to think that kids are “brats” because they don’t see children as actual people with thoughts, feelings, needs and desires, preferences and wants of their own.  And guess what?  Children have all those things just like adults do.  On top of that, they do not have the skills and knowledge to always communicate those thoughts the way that adults do. If they did, THEY WOULD NOT NEED PARENTS.

The first item on the “Brat List” is “we negotiate.”

Yeah, we do negotiate.  It’s called collaborative problem solving and it’s actually empowering to allow kids to find mutually beneficial solutions, learn to compromise, and build loving, supportive and respectful relationships with their parents.   Some children, especially children who are naturally anxious need to know that we can be flexible and so can they.  And teaching flexibility is best done by modeling those same things in your own actions, words and deeds.   I wouldn’t bark orders at my friend or my spouse, so I am not going to do it to my kid.  My child is a human being and he deserves respect too.

The second item on the list is “we clean his room”.

I do not clean my son’s room, but he does have a hard time with executive functioning, organizing and motor planning.  We’re both autistic, so that sometimes comes with the territory.  What I do is to help him when a task seems so overwhelming.  We break it down, we make some lists and we figure out a way to do it that isn’t a battle because in the grand scheme of things, toys on the floor and a messy pajama drawer are not a big fucking deal.

“we carry the backpack”

Why the fuck do you care who carries my kids backpack?  Do you know my child’s medical needs?  Not all disabilities are visible and my child has a physical disability that makes it hard for him to do some of the things that other kids can do easily.  When his backpack gets too heavy for him, I will help him if I can.  Even if he did not have a disability that impacts his ability to sometimes do these things, I would still help him if he asked for help.   If I was walking with my spouse and he said “this is getting too heavy for me…”  My response would not be to tell him to fuck off and stop acting entitled.  Children don’t deserve to be treated like shit just because they are littler than you and have no power.

Perhaps one of the shittiest and most annoying things on this list is “we ask them what they want for dinner”.

Okay, put aside the fact that some people (and again, “people” includes “children” because children are people! Radical concept!) have very disabling sensory issues with food.   Let’s just forget about that incredibly ableist assumption that any kid should be able to eat the food you give them.  It’s just a plain fucked up thing to do to ANY kid.  Would you like it if you had no say in what you eat?  Would you think it’s okay to be forced to eat something just because your mom or dad picked it out?  You don’t even have to cook two dinners (though that is something that I often do happily because I like to cook).  It’s not that hard to just let a kid make a sandwich instead of being forced to eat food they do not like just because you’re a power tripping bully.

Another incredibly ableist point on this list is “we make excuses for bad behavior or bad grades.”

Behavior is communication. ALWAYS.  All the time, every day.

And you know what?  I don’t always “behave” well.  I get annoyed, pissed off, upset, have a crappy attitude all the time when I am having a bad day.  Or I am tired.  Or I am overwhelmed.  Why don’t kids get to have that too?  What about children makes us think that they must always be pleasant, well behaved, compliant and obedient without question?  Why aren’t kids allowed to experience the full spectrum of human emotion?  They are not robots.  I don’t know about anyone else, but I am proudly raising a noncompliant child who questions authority and knows his worth.   “Behaving” according to ableist standards is not a priority for either of us

And grades?  There are plenty of reasons for not having good grades.  Learning disabilities, hostile sensory environments, children being herded like cattle and only taught to repeat facts instead of actively learning, exploring and engaging.  There are a number of reasons for not having good grades, including the fact that as humans, our learning and communication styles are wide and diverse…..and these are not excuses, they are a way to understand how to support and accommodate each other.

“we argue with the teacher and the coach”

Adults are not always right.  They just aren’t.

And for parents of neurodivergent and otherwise disabled kids, not  having to argue  with the adults who are supposed to work with our children is a rare thing indeed.

As a disabled, autistic child, here is what adult teachers and coaches did to me:

Those are some of the things that my mother had to “argue” about with my teachers.  Every single one of those teachers said I was just a “brat”.  Every. Single. One.   And one of the biggest reasons that we became an unschooling family is because I found out that not much has changed for developmentally disabled kids today.  They are still called “lazy” and “brats” and accused of using their disability as “an excuse”.

Calling a child names because they don’t do what you want them to do is not good parenting or good humaning. It’s what bullies do and I refuse to be my child’s bully.

No, my kid is not a brat.  He’s a human being who has good days and bad days and is doing the best he can to navigate this world, in spite of people who think that his youth and disabilities are just “excuses” when he does not buy into your particular line of bullshit.

My kid is not a brat, but if you think it’s okay to call children names for daring to have emotions, needs, and wanting respect, maybe it just means you’re kind of an asshole. 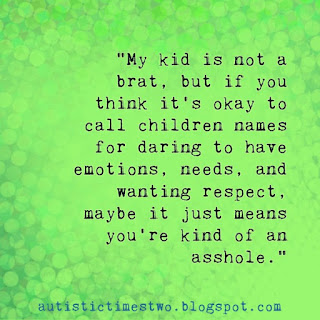 image: green/blue textured background with black text that reads: "My kid is not a brat, but if you think it's okay to call children names for daring to have emotions, needs and wanting respect, maybe it just means you're kind of an asshole."