The first time that someone believed me about why I am unable to drive a car was actually fairly recently.   It was a few years ago when I was commenting on a thread on Mama Be Good's Facebook Page.   To be quite honest, I do not remember what the thread was about now, but I had commented about how I felt unsafe driving for lots of reasons:
terrible visual processing
anxiety
poor executive functioning
poor depth perception
inability to multitask
VERY poor sense of direction (I get lost often and disoriented easily)
tendency to hyperfocus (which can be great at times, but not when you need to pay attention to multiple things on the road when you are driving)

I was just venting, actually but when I got a response from the page just telling me that I was doing a good thing, trusting my limits and making safe choices and should be commended for that, I can't even begin to describe how that felt.

I am forty years old and for the first time in my life someone believed me. They didn't ask me to explain all the reasons (though I did because I was anxious about not being believed).  They didn't tell me to try harder to be less anxious (ignoring all the other reasons that driving is unsafe for me). Someone believed me  and it felt like such a huge relief.   I am pretty sure that I cried all day.

Maybe I wasn't selfish (as others had called me).  Maybe I was not "making excuses", but actually listening to myself and recognizing what was best for me (and anyone else on the road).  I wasn't just asking for people to "coddle" me.   I wasn't pretending, or weak, or too afraid.  For once, I felt like I wasn't a bad person just because I couldn't drive a car.

That is the power of someone believing you.   For most of my life, I have not been believed.   I think that a lot of Autistic people and those with "invisible" disabilities can relate to this because we are so often told that if we just try harder we can do the thing.  Except sometimes, we can't.  And not being able to do a thing should not be shameful or seen as a weakness.

There are a lot of things that I can do exceptionally well or in my own way. There are a lot of things I will never do.   And that's okay.   If I say that I can't do a thing, please don't make me "prove" it to you.  Please don't ask me a million questions that feel like I'm being interrogated.  Just believe me. Trust in me.  Assume that I know my own limits and I'm not just trying to make everyone around me miserable or put out because of my disabilities or my inability to sometimes do the things that many take for granted. 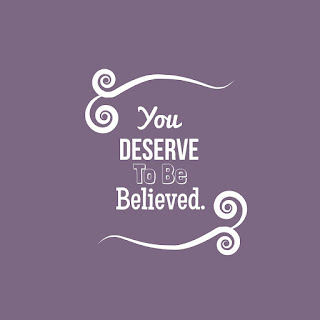 Image: dark purple square.  White text in various fonts reads: You deserve to be believed. White swirly/squiggly lines on top and bottom of text.
Posted by Lei at 12:37 PM