One of the children's books we have available at our Autism Acceptance Lending Library is "Ed Roberts: Father of Disability Rights" by Diana Pastora Carson.  The book tells the story of Ed Roberts from his childhood, becoming disabled and his advocacy, activism and fight for access and inclusion.   Featuring beautiful and colorful illustrations by Patrick Wm. Connally, this is a wonderful introduction to the man known as the father of the disability rights movement.   This book also has a "symbol" guide near the back of the book to explain some of the symbolism in the illustrations and to open up a dialogue with readers.   This is ideal for a classroom discussion or one on one learning at home. 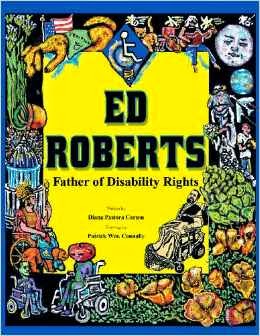 "They told me I'd be nothing but a vegetable.
Here I am an artichoke.
I choose to be an artichoke all prickly on the outside
with a big, tender heart."
-Ed Roberts

This is my nine year old's review of the book:


My Review by F

Ed Roberts stood up for disability rights. Ed Roberts was not born with a disability but he became disabled when he was fourteen when he contracted polio. He had to stay in an iron lung. His doctors said he couldn't go to college or get a job or even get married. His parents were worried. He went to college anyway. He taught himself school through the phone to graduate from high school. He taught himself how to breathe different so he could leave his iron lung sometimes. He became the director of the Department of Rehabilitation after he went to college. He had to fight a lot when he was in college. He had to fight just to go there, for one thing. I think he probably saw a lot of unfairness and that made him fight harder. He fought all the time harder and harder. Not only that, he got his job being the director of the Department of Rehabilitation after they told him it would be a waste of money to help him. They said that because he was disabled. Ed Roberts proved that people with disabilities had their own rights. People with disabilities are as good as anybody else. Ed Roberts was important in  history because he fought for rights. Laws about disability rights are still evolving to this day. Because of the work he did, we are still fighting. Ed Roberts made life much better for us all.
Posted by Lei at 2:39 PM